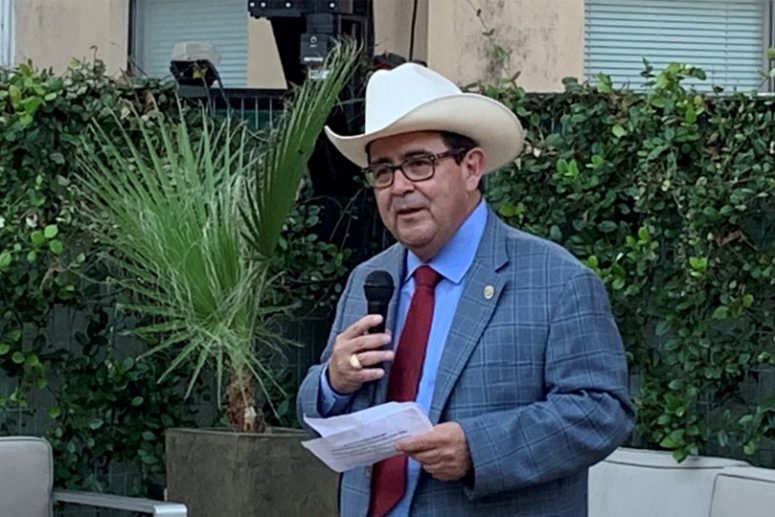 Indeed, at first glance, one might be forgiven for taking Sen. Pete Flores’ (R-Pleasanton) word of his own self-description.

He showed up to the burger stand to meet constituents, wearing what he dubbed “lawman’s” garb — toe to head: boots, jeans, plain blue button-down, red tie, and a crisp cowboy hat. As they say…you can take the warden out of the game, but you can’t take the game out of the warden.

While Sen. Pete Flores looks to be every bit of that genuine “regular guy” he identifies as, his life experience is quite irregular…and rather remarkable.

The now-retired game warden spent his career in Texas’ Parks and Wildlife Department — with eight of those years as colonel (head warden). After such a career, most would likely prefer to enjoy a simple retirement and maybe pick up a hobby like woodworking.

Well, Flores’ hobby — he, more appropriately, dubs it a “calling” — is representing Senate District 19 in the Texas Legislature.

“It was necessary,” Flores told me of his decision to run. With his predecessor — whom Flores ran against in 2016 — being indicted for his role in a Ponzi scheme, the usually safe Democratic seat came up for grabs in a 2018 special election.

In 2018, he won a race few thought he could win. In fact, he is the first Republican to represent SD19 since post-Civil War Reconstruction. Flores came out on top in both the general and the run-off elections.

Since taking office — citing his long history of civil service as decent preparation for what he would face in the legislature — Flores has hit the ground running.

As a freshman, Flores had a significant hand in over 30 bills that reached the governor’s desk.

What he seemed most proud of — which he co-authored — was the property tax bill. Although not going so far as to declare it a “Super Bowl”-type victory, Flores expounded on the need to focus on what he calls the “pillars” of the state government.

“It was a stacked deck,” he said referring to the property tax system in place that SB2 adjusted. Flores added, “We thought the 3.5 percent threshold was fair — allowing our cities and counties some flexibility to be able to continue to function well while also requiring them to live within their means.”

“If the need to raise it above that value is so compelling, ask the boss: we the people,” he stressed.

Another aspect of the property tax debate Flores tried to tackle during the 86th Legislature was the appraisal process. He’d like to see it become more transparent, accountable, and uniform — “rather than having 254 different ways of doing it.”

He then pointed to this as a top priority for the next session.

The current property tax system in Texas traces all the way back to the Carter administration when inflation was running rampant. And until this session, it seemed to be set in stone. But Flores didn’t see it that way: “For me, the only thing set in stone is the Ten Commandments. What the legislature creates, the legislature can also uncreate.”

As for SB2’s “brother from another mother,” HB3, Flores touted the tax relief it provided while also raising teacher’s salaries so they, in his words, “don’t have to work two or three jobs to be a teacher.”

Flores’ mindset in serving his constituents is: “It’s all about being part of, and responsive to, your community.”

As I watched the former game warden make his way around the burger joint — stopping to speak with everyone there — I noticed a quiet determination. A determination to truly reach as many of his constituents as he possibly could.

Sure enough, I’d come to learn that was exactly the case, as he told me another one of his mottos: “Face time makes miracles.”

Which leads to yesterday — another day in his post-session circuit of touring SD19 which stretches from the urban neighborhoods of San Antonio all the way out to the New Mexico border.

The events turned out to be quite civil, similar to some recent town halls but wholly unlike others.

Due to his relentless district outreach events, Flores just eclipsed 185,000 miles on his 2012 F-150. In fact, he has done so many events that he couldn’t come up with a number when I asked for a ballpark figure.

Gathered on the porch of Uvalde’s pizza and brewhouse, Broadway 830, a few dozen constituents listened intently to the senator methodically and rather thoroughly explain what was accomplished in the 86th Legislature and his priorities going forward.

During the question and answer portion, Flores was asked about the possibility of a special session, the Texas Lottery Commission, and red flag laws.

To the first, Flores said, “There’s always a chance.” Specifically, Flores pointed to Governor Abbott’s ultimatum to Austin over its handling of the homelessness situation.

But to the third, Flores received the most pushback at any point during the day. When asked about standing firm against red flag laws, Flores pointed to the need to enforce the laws already on the books. He also added, “Under current Texas law, [there is] nothing to worry about.”

Flores expounded on this to me earlier, saying, “Let’s see what they (the committees appointed by the Governor and Lt. Governor) come back with, but let’s not start to talk about depriving lawful citizens of their property before we have that thorough analysis.”

Flores also added that in his view, “the Second Amendment is pretty clear and the laws on the books need to be enforced more vigorously.”

Dr. Alma Arredondo-Lynch, D.D.S — whom I later found out is running for Congress in District 23 — asked the question of Flores. When I spoke to her afterward, Arredondo-Lynch said she is quite happy with Flores and the job he has done. But she did take some issue with Flores’ response to this question.

“My concern is with our civil rights,” Arredondo-Lynch stated, pointing to the fact that under red flag laws a disconcerted neighbor could effectively cause someone’s guns to be taken away. “I live alone on a 240-acre ranch…and if a neighbor decides to report me, then I have to prove my innocence rather than the state prove my guilt,” she stressed.

Arredondo-Lynch stated she would like to see a special session called to address this issue — not to advance it, but rather, to crush it decisively.

Another attendee (who is also a candidate for local office), Diana Olvedo-Karau, has been very pleased with Flores’ time in the Senate. “He makes strong points but does it in a way that engages constituents and doesn’t completely offend those of the opposition,” Olvedo-Karau applauded.

Olvedo-Karau also pointed to the need for property taxes to be further addressed in the next session.

The biggest round of applause received from the crowd occurred when Flores told the group of his 100 percent attendance record, casting over 4,300 votes. Whether they agree with him on everything or not, Flores’ constituents obviously appreciate his focus on doing things the right way.

One phrase I heard throughout the day was “Vote your district.” But Flores prefaced it to me, saying, “This isn’t about getting reelected, it’s about doing the right thing.”

And part of that, Flores stressed, is avoiding the rank partisanship that permeates through most of politics these days. He emphasized the need to reach across the aisle to ensure the pillar issues are addressed.

Perhaps it’s fitting for SD19 to select a former lawman to supplant a now-convicted felon — and a man who says he’s “never had a vacation in his life.” Soft-spoken but determined, he clearly enjoys representing his constituents — making a point to ensure they have access to him, and he to them.

As Flores continues his district tour, and heads into election season, it’s fair to wonder if his already road-tested F-150 will make it through all the miles. Yet, if the man behind the wheel is any reflection on his vehicle — the results may not be flashy, but the job will get done.