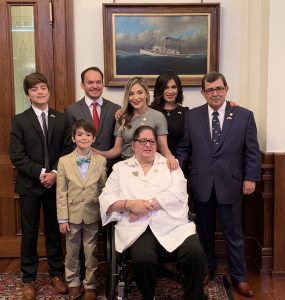 A former leader of Texas Parks and Wildlife’s statewide law enforcement division with strong ties to South and West Texas, Flores sees the Texas State Senate as another way he can serve the region.

“I would bring strong managerial, budgetary, governance and leadership experience to the Texas Senate having been responsible for $60-million budgets, managed more than two dozen field offices, and supervised more than 127 civilian employees and nearly 532 commissioned officers,” Flores said.

As Colonel Game Warden for Texas Parks and Wildlife, Flores built a strong reputation for implementing community-based law enforcement protocols and successfully coordinating law enforcement operations with local, state and federal law enforcement officials. Pete Flores has the experience in the state senate to work with local leaders to ensure our part of Texas gets the resources we need to pull through these tough economic times.

Pete Flores grew up in South Texas, graduating from high school in Laredo and attending Laredo Junior College before graduating from Texas A&M University. The first Hispanic Director of Law Enforcement for the Texas Parks and Wildlife Department, Flores is a graduate of the Governor’s Executive Development Program and the National Conservation Leadership Institute’s Fellowship Program, and served as vice president of the National Association of Conservation Law Enforcement Chiefs (USA).

Flores honorably retired from state service in 2012 and now works as a consultant and instructor for the National Association of Conservation Law Enforcement Chiefs Leadership Academy. He and his wife, Elizabeth, live in Pleasanton and have two adult daughters and two grandsons. As a state senator, Flores would represent the people of  Atascosa, Bandera, Bell, Burnet, Coryell, Gillespie, Kerr, Kimble, Lampasas, Llano, Medina, Sutton, and Williamson counties. Flores maintains a Master Peace Officer Certificate and would like to serve on the Senate’s Criminal Justice and Natural Resources committees.

Pete Flores believes his years as a Texas game warden will fit well with his new role as a candidate. “We have a saying that a good game warden never met a stranger. I look forward to visiting with those I’ve known for the last quarter century and meeting with new folks throughout the district, discussing issues and ways we all can work together to make this part of Texas an even better place to live, work and raise our families. I will draw on my experience in law enforcement and government and will value their experiences and ideas.”

From an Air Force family, Pete’s family settled in Laredo after his father retired from the USAF. He graduated from Laredo Martin High School, attended Laredo Junior College and graduated from Texas A&M University. Pete worked as a Farm Technician for TAMU Vet School then was accepted to the Texas Game Warden Academy in 1985.

Pete and his wife Elizabeth married 38 years reside in Pleasanton, Texas where he decided to retire after serving the State of Texas for 27 years as a State Peace Officer. Pete is blessed to be a Texan and devoted to God, family and public service.

He stated that Honor, Integrity and Service are foundations of his character and strongly believes that we are only as good as our word. “If I give my word, it will be good”.

He holds a Texas Master Peace Officer certificate, is a graduated of the Governors Executive Development School and is listed as Fellow of the National Conservation Leadership Institute.

Pete’s favorite quote is “There are two sides to every tortilla”.

He has a personal interest in wildlife, antiques and books.